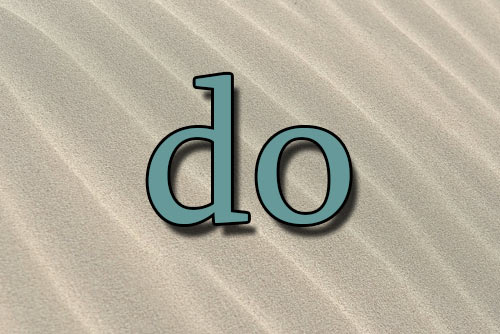 The question in the title may be a bad teacher joke, meaning something like “Can you survive with just do?”, but it is also a serious one. For many of my students, choosing between “do” and the similar word “make” when speaking English can cause a lot of problems, and here I’m going to try to explain how I see it.

The first thing to remember about “do” and “make” is that “do” is normally a much more common translation of the word usedto talk about actions in other languages (hacer in Spanish, faire in French, etc). “do” is the ‘general’ word we use it when we don’t know or don’t care what action we refer to, in questions like “What are you doing?” or prohibitions like “Don’t do anything until I get back!”. In the second example, “anything” could be any number of things that go with the verb “make”: “make a mess”, “make holes in the carpet”, “make war on the neighbours”, etc, but we would never say “don’t MAKE anything”because it would sound strange. “make” is a less ‘important’ verb than “do”, in my view, and I don’t think we teachers do you many favours by always selling them as twins. As a good place to start, I’d recommend that you use “do” as your default option and reserve “make” for certain specific (but common) cases.

The first use of “make”, in my opinion is not with the typical nouns that you find in textbook lists (“make a mistake”, etc), but with verbs and adjectives. “Make” is very handy when you want to talk about causing things to happen or change and is simple to use. You put the victim of your magic after the verb “make”, then put the adjective or verb that describes the change that has happened to them. So, if you “make your sister laugh”, you are saying that it was your influence that caused her to laugh, and if you add sugar to “make the coffee sweeter”, it tastes better because of you. This use is not always for happy things, however, as when the government “makes us pay” taxes.

Making is Creating but not just with your Hands

When used with nouns, “make” is normally something creative that produces a new thing. But not all of the things we createare physical or tangible because we don’t just create things with our hands. We “make a good impression” with a combination of appearance, body language and most importantly, speaking. A lot of the nouns that we use with “make” are formed from ‘performative’ speaking verbs, which are even more magical than the previous use because you create new things just by speaking them. When you “commit” or “make a commitment”, you have a new thing to think about, and the same applies when you make a threat, an announcement, or an offer. This could be why politicians consistently refuse to actually make an apology for things that their countries have done wrong in the past, even if they are truly, and deeply regretful, etc.

The next big category of nouns used with “make” includes a lot of words relating to the money that we generate by working. Most of the work that we do to make this money is introduced by “do”: we “do business”, “do maintenance” and “do deliveries”. The end result, however, is that we “make money”, “make a 10% commission” or “make a fortune”. Of course, you’re also responsible for what you do badly, which is why you admit that you “made a mistake”, when you generated a negative outcome.

Making or Doing the Toast?

But don’t get too excited… The examples above are all useful and I hope they help to show the connections between the types of words that English speakers feel the need to use with “make”. They are all creative in some way, and for that reason they are maybe a bit more special than “do”, but remember: at the end of the day, “do” is still your go-to option. I think you’re much more likely to get away with using “do” when you need “make” than vice versa. If you say “I cleaned the kitchens then I did the beds”, not many people will tell you that you should have made those beds (and if they do, they’re probably English teachers, so best avoided).

The power of songs

On the other hand, if Bryan Adams had sung “Everything I make, I make it for you”, it would definitely have sounded weird. He would have seemed like a mad inventor from a 1950s horror film, with inevitable consequences for his record sales. Personally, while I accept that cooking is creative and that anything requiring a recipe probably justifies the use of the verb “make”, I am increasingly convinced that things like toast, coffee and cereal should be demoted to the status of “do”, and I find myself saying that I’m “doing toast” much often than “making” it, which sounds a bit pretentious. Perhaps you “make” real coffee but you “do” instant? The point is that in many cases, it’s not as clearly defined as the textbooks say. If you are not sure, it’s quite likely that natives like me share your doubts and in those cases, you’re nearly always safer using “do”.

To sum up, if you always use “do” as your ‘action’ verb except in the situations described above, I think you will be OK in most situations. If you can’t be bothered to learn the exceptions and want to just use “do” in all cases, you’ll probably be OK too, but don’t tell your teacher I said so. The only one you absolutely have to learn is “make love”. Inviting someone to “do love” just doesn’t have the same magic…