Get more from GET 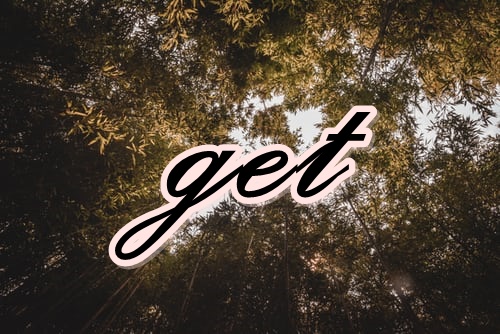 GET is one of the most popular verb​s among natives

What do you think are the most common verbs used in English? You probably guessed that the first and most important, is “to be”, usually followed by “have” and “do”. Then websites start to disagree about whether we “see” more than we “say” or vice versa, but they all agree that one verb is much more popular with natives than it seems to be with my
students, and that verb is GET, the faithful friend that you are probably not using enough.

More useful than you may think

I think one of the reasons why students don’t get maximum benefit from “get” is that, when you start learning English. We teachers tend to focus too much on the freaky form “have got”. It’ true that this is very common in spoken English as an alternative for “have” (“I’ve got a car” is the same as “I have a car”) but it’s never necessary. You can speak English for the rest of your life using the simple verb “have” in all forms.

The problem with using “have got” is that the grammar is strange (it’s a present perfect form with a present meaning) and I think it gives people the idea that this is the only use of “get” that is worth learning, when in fact I think the opposite is true: “have got” is the most difficult and least helpful use of this marvellous verb. If you take a bit of time to get to know “get” better, I think you’ll agree that it’s a lot more than just a colloquial and complicated way to say “have”.

First, it’s a handy alternative for “arrive”, with no difference in meaning, and maybe with an easier preposition (“get to the office” may seem more logical than “arrive at the office”). Even better, it can substitute a lot of tricky verbs connected with receiving and acquiring. If you don’t want to remember the difference between “earn” and “win” you can solve the problem by using “get” for both. However, for me the most interesting use is one that we often don’t practise enough in English class. We teach students that, when it’s used with adjectives and participles like “cold” or “bored”, “get” means “become”.

As a result, if your coffee “gets cold” or your kid “gets bored” in English they “become” these things and learners naturally translate these ideas using the word for “become” in their language. For an English speaker, “become” is a valid substitute for “get” in these phrases, even if it’s much less common. Then I moved to Bilbao and started learning Spanish properly and I realised that even though I had learned the Spanish word for “become” like a good niño, when I tried to use it in speaking, it was hard to construct and didn’t sound natural. This was frustrating until I realised that really, the most common way to translate this function of “get” in Spanish wasn’t with vocabulary, but with grammar.

Get as a ‘Cheat’ for Reflexive Verbs

Spanish has a lot of more “reflexive” verbs than English (for example “hurt yourself”) and I started to realise that the best way to say “get cold”, “get bored” and many other similar expressions in Spanish was to use reflexives like “enfriarse”, “aburrirse” etc. This has helped me a lot with my fluency and if you’re studying English and find this use of “get” difficult to learn, try translating examples like “get angry”, “get tired” or “get wet” into your language and see if you find similar connections. You might find that this gives you a more natural and authentic understanding of this use of “get” than the standard method of translating it as “become”.

To sum up, I think that “get” is more friendly and less scary for English learners than
many people think. It can rescue you in those situations where you can’t find the perfect word
and it allows you to access that reflexives function that you maybe have in your language but
can’t find in English.